Somewhere between half and two-thirds of engineers and scientists with second jobs don’t work in their field. And people who earn less money at their day jobs are more likely to hold second jobs. I’d imagine that many of those people are struggling to pay rent, mortgages or student loans.

The study didn’t mention what kinds of second jobs these scientists and engineers hold. However, I’d imagine that consulting and freelance work rank high on the list. Many companies want to hire engineers and scientists to lend credibility to projects or to tap expertise that they don’t need on a full-time basis. Of course, my list of second job ideas still applies.

Check out my book on Side Jobs: 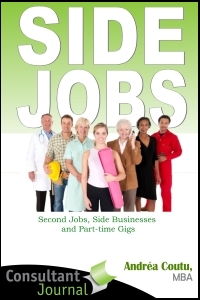 "Second jobs for engineers and scientists" from Become a Consultant at ConsultantJournal.com.

Get 6 Tips for Jumpstarting Your Expert Status